What do you think of it so far? Morecambe Takes to the London Stage for the 2009 Festive Season 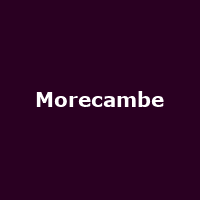 I'm old enough to remember Christmas Specials on the telly, thirty-odd years ago. Dick Emery (peak-time character-comedian and frequent drag-act), Val Doonican ( tank-topped crooner in rocking chair) and The Osmonds (gleaming-gobbed warbling saccharine machine) all filled our living rooms with festive versions of their same old jokes and music, with added piles of aerosol-snow and dangling baubles in order to kid us it was actually different. The real TV occasion at Christmas though, was the Morecambe & Wise Christmas Show. Every year, Britain's biggest comedy duo (and the start of a few more afterwards) would wheel out beautifully-timed jokes, adlibs and star-guests with bewildering consistency. The usual series was often hilarious and didn't really need the Christmas make-over since the audience would still tune in anyway. Let me just say, 'Shirley Bassey singing on a moving set wearing a hob-nailed boot' and you get the idea of the chaos ensuing. It urinates all over 'X-Factor' et al - and 28 million people tuned in to the 1977 Special (half of the population).

'Morecambe' is a respectful and spot-on stage representation of one-half of the dazzling duo, the 'tall one with the glasses'. It stars the scarily-accurate Bob Golding, a man who was spotted as a co-star on a Steve Martin production by Guy Masterson, the maestro behind this Duchess Theatre (London) version. The biographical play (real characters, imagined words) has appeared at the Edinburgh Fringe and is now set to wow the West End from December 9th to January 17th. It is suitable for all ages and will no doubt feature situations from previous Eric & Ernie shows.

Tickets are on sale now for matinees and evening performances. The performances run from Weds to Sun, matinees are on Wed and Sat (2.30) or Sunday (4pm) only. There are extra performances on Dec 17th, 22nd, 24th and 29th. Prices start at Â£27.50 and rise to Â£37.50 which includes a donation to the Restoration Levy. [After the London stint, the show takes to the road - Ed]

I'll leave you with my fave line of many from their show. Eric is explaining his appalling piano-playing ability to renowned conductor, Andre Previn......

Listen, Mr Preview, I'm playing all of the right notes but not necessarily in the right order........

Subject to availability, we're able to offer you the best seats in the house for just Â£25 including booking for various midweek/ Sunday performances (evenings and matinees). Check the "Morecambe Offer" button below for availability.