What the Puck? Hockey are Coming Back to the UK for Feb 2010 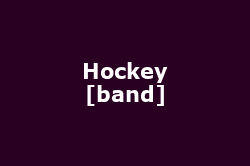 Portland's groovy young indie-dance kids, Hockey, will be coming back atcha in 2010 with a few dates. They start their five sessions at London's Koko on February 24th, followed by dates in Manchester (Academy 2) on 25th, Glasgow (Queen Margaret Union) on 26th, Belfast (Spring And Airbrake - great name) on 27th, before nipping South to Dublin's Academy on the 29th.

Hockey is a hybrid of LCD Soundsystem and David Byrne-esque rhythms and good old pop songs. Nowt wrong with that and you can check out tracks from their 'Learn To Lose' album, released earlier this year on Capitol to reasonable acclaim. Their single, 'Too Fake', would certainly give Jack Penate and Rumble Strips a run for their money. They have also previously appeared on Jools Holland's music show. They are working on new material.