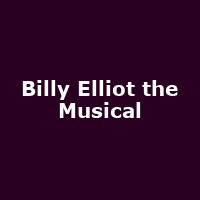 We all love an underdog story - the battle against adversity, the fight against all odds and Susan Boyle eye-browing her way through a medley of Morrissey songs on 'I'm Having a Drinks Receptacle Hurled At Me, Get Me A Gun' (maybe)....

Billy Elliot is one such classic British film that became so successful, with its heartfelt tale of a boy who just wanted to dance but was surrounded by ignorance and discrimination, before rising to the occasion. Like 'Little Voice' and 'Full Monty', the film turned into a stage production in 2005 and has proved a perennial favourite, hence the newly-extended run until 18th December 2010.

The extended run also welcomes a new member for the starring role - Dean-Charles Chapman. The lad has already appeared in the musical as far back as the opening night (as Small Boy) and last year as Billy's best friend. Internal promotion thus justified, methinks. Other main characters will be played by the same actors.