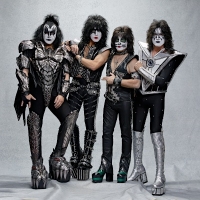 US mega-group Kiss have been rocking out and dressing up like monochrome Thundercats for just over 35 years. In which time, Gene Simmons, Paul Stanley and co have shipped more than 100 million albums.

In the week that the band remembers their former drummer Eric Carr who died 18 years ago from cancer aged just 41, the legendary spandex-and-grease-paint combo have announced a 2010 European tour that includes their first UK tour dates for 11 years.

The snappily-titled Sonic Boom Over Europe: From The Beginning To The Boom Tour follows this year's Sonic Boom album and starts in Dublin on 7 May.

Sonic Boom - the band's first studio album in more than a decade - raced to the top of the US Billboard Rock Album chart shortly after its October release. After Dublin, Kiss take the new material to dates in Glasgow, Manchester and Birmingham before the final UK date at London's Wembley Arena on 13 May.

Tickets go on sale on Friday 27 November at 9AM (pre-sale Wednesday 25 November).