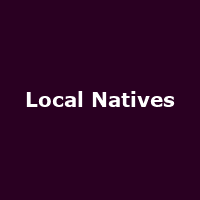 L.A.-based scamps, 'Local Natives' have announced an eight-date tour of the UK next year. The NME Radar hopefuls will start their short stint in Bristol at the city's Thekla venue on February 24th and continue on to Nottingham (Rescue Rooms) on the 25th, Brighton (Concorde 2) on the 26th, Norwich (Arts Centre) on the 28th, London's Heaven on March 2nd, the Birmingham O2 Academy on the 3rd, Manchester Club Academy on the 4th and finally finishing in Newcastle on the 5th at the O2 Academy.

Local Natives have a new album, 'Gorilla Manor', out now and have been the indie-press darlings of the summer with their expansive and languid guitar rock, coming on like Ben Folds meets Doves. The single, 'Camera Talk', had plaudits from all corners and justifiably so. Prior to their 2010 dates, they have a slot confirmed at the XFM Winter Wonderland at Brixton's O2 Academy on December 16th plus a one-off gig at the Hoxton Square Bar and Kitchen on Jan 19th 2010.