You've Been Tangoed! Gotan Project present a Quartet of May 2010 UK Dates 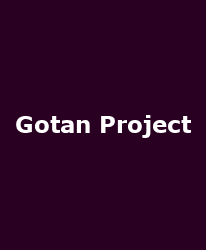 Paris-based tango-electronica trio, Gotan Project, are to come to the UK for four special dates next year. The gigs take place on May 12th 2010 (Birmingham O2 Academy), May 13th (Bristol Colston Hall), May 14th (London Brixton O2 Academy) and May 15th (Manchester Apollo).

Totally unique and immensely popular with a wide cross-section of fans, Gotan Project have been fusing dance beats and traditional tango for a decade now and have spawned a million-selling debut album, 'La Revancha del Tango'. This 2001 album was, and remains, a landmark release, not least for its inclusion in many chill-out DJs playlists - it's also highly recommended, if you haven't already bought it. Although the follow up studio album in 2006, 'Lunatico', failed to scale the creative walls, it still impressed enough to keep the Gotan adoration going.

In 2008, the band (core base, a trio though often a nine or ten piece) released 'Gotan Project Live' to give you a taster of what they can achieve under the lights. These tickets will fly out so get clicking quickly on Friday.