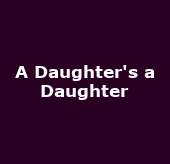 A Daughter's a Daughter

After 55 years residence in the city of Bath, Agatha Christie's (or should I say her alter-ego Mary Westmacott's) play, "A Daughter's a Daughter", moves to the West End for a limited run at the Trafalgar Studio 1 theatre, beginning on December 14th until January 9th 2010. The cast will include the much-loved and travelled actress Jenny Seagrove, West-End newbie Honeysuckle Weeks, Tracey Childs and Ann Wenn. Seagrove has been a regular in West End stage productions for many years, appearing in 'Night Of The Iguana' and 'The Secret Rapture' among others.

Unlike many Christie works, this is a conventional play about a dysfunctional family trying to stay together during the Second World War, in particular the strained relationship between mother and daughter (Seagrove and Weeks). Jealousy and hatred rise to the surface as the daughter continues to disappoint her mother with futile decisions. The story is one of six novels written as Mary Westmacott and represents a change in style for Torquay's most famous daughter.