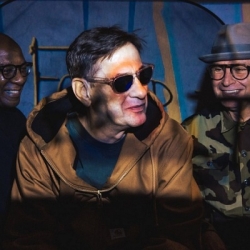 Brighton's Concorde 2 and the Sunday Social have teamed-up to bring you a belter of a charity gig on the South Coast next year. The party is being held in aid of the Children's Burns Trust, a national charity dedicated to providing campaigns to raise awareness of the dangers of children being scalded and burnt in the home, working with the NHS to provide direct help and funding and offering financial support and advice to families affected by serious burns and scalds. Prevention, rehabilitation and support - excellent idea.

Here's a thought for you - nearly 50% of children admitted to hospital have been seriously burnt by hot drinks and with the busy and woozy festivities approaching, a scald could be for life not just for Christmas.

The gig in question falls on March 7th 2010 (my birthday!) and will feature a sexy danceable line-up. Tickets will cost £15 for the event (it starts at 5pm by the way) at the Concorde 2.

There will be eight supporting DJs plus big names, Steve Mac, Danny Rampling and Justin Robertson spinning the wheels of steel across two rooms of funk, house and electro. Robertson has fired-up his Revtone project again with a new track released on December 3rd called 'Ride Ride Ride'. Rampling is a legend of bouncy disco-house and founder of Schoom, 'nuff said.

A Certain Ratio and Transformer will provide some top-notch live music. A Certain Ratio are awesome live (check our review - under "reviews" in the sidebar) and have recorded landmark releases for Factory including 'Shack Up', 'Flight', 'Knife Slits Water' and 'Mickey Way' as well as their recent import album, 'Mind Made Up' ,which is a real slammer. This date will follow their appearance in Brussels in December at the 'Factory Night' (Plan K). Transformer are local 'dapper disco mavericks' who make nice squelchy electro-funk.

Tickets are on sale now! For donations to and further details about the charity please visit www.cbtrust.org.co.uk