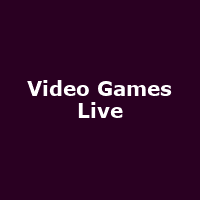 Do you remember pumping unlimited rounds of prime laser-buckshot into evil aliens, bolshie bosses and entire infantries during your favourite console or video games and thinking, 'I'd love to hear this music without the sound of tortured bodies being splattered around an infertile planet'? Well, put that controller down for five seconds and read this because you can hear your favourite gaming soundtracks 'in the flesh', courtesy of Video Games Live.

Yep, this is the hugely successful orchestral phenomena that takes well-known games music and plays it back symphonically in large auditoriums around the world. And they are coming to the UK and Ireland over the next week or so. Created and produced by two leading lights in the video-gaming industry (Tommy Tallerico and Jack Wall) and supported by the very best orchestras, you can relive the care-free days of Sonic, Mario and Zelda or bullet-pumping nights of Metal Gear Solid, Halo and Medal of Honor in the comfort of a concert hall.

Wednesday night (November 25th) will see the continued tour reach Gateshead (The Sage - Â£22.50) and continue through Dublin (two performances at 3.30 and 7.30 at the National Concert Hall) on November 29th before reaching Cardiff's International Arena on December 3rd (Â£27.50 - Â£40). The tour has sold out-in many countries so be quick!