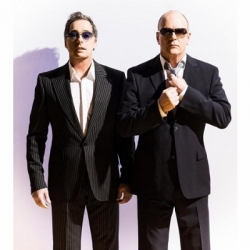 Endurance is a good word to describe the survivors of the 80s pop-music scene. Often reviled and laughed at during their hey-days, many groups are now playing the circuits again and enjoying life as stars once again.

Go West are one such act who achieved nine top 40 hits over a nine year period, an era that wasn't always kind to Messrs Peter Cox and Richard Drummie. They chalked up a quartet of hits from their 1st album, 'Go West' including perennial favourites "We Close Our Eyes", "Call Me" and "Goodbye Girl", before slipping from view for a few years until a soundtrack appearance on 'Pretty Woman' pushed "King Of Wishful Thinking" into within audible range of the public's ears.

Although Peter Cox is sparring with Manfred Mann's Earth Band, he and Drummie have decided to celebrate Go West's 25th Anniversary with an extensive UK tour in starting in April 2010. They are also appearing at Wave 105's Christmas Bash in Southampton on the 12th of December - but that sold out a while ago! So better be quick for these!

The first date is on April 8th at Cheltenham's Town Hall and continues across the country to Lowestoft, Birmingham, Gateshead and more (see below) before hi-tailing it back to their home town of London at the IndigO2 on the 23rd, playing at a holiday park in Chichester (West Sands) on the 24th and completing 'operation anniversary' with a Milton Keynes gig at The Stables on the 25th.