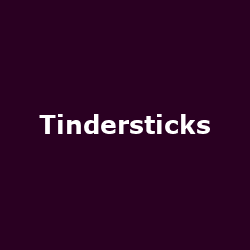 Nottingham's Tindersticks are officially an unknown national treasure - yes that's right, no one seems to know who they are but, when you utter their moniker in the direction of anyone in a pub awake enough to listen and imbibe, they will either go all funny and ramble about how lead singer Stuart A. Staples sounds like Nick Cave, or they will punch your eye-sockets inside out and turn your pint into an art-form by shoving it in your ear. Either way, Tindersticks have been the subject of one or two drinking discussion during my time in music retail, more often the subject of "which bands should be famous by now?".

18 years old and barely sporting a tuft of chin-fluff, this fine, grandiose, symphonic core trio and occasional guests have recorded many top-notch albums since 1992, when their first eponymous album crept into the shops, sold a few and then crept back out again. 6 more epic albums, including the quality duo of "Curtains" (1997) and "Simple Pleasures" (1999 and a decent major-label debut).

Now it's probably going to be a similar story with their 8th opus, "Falling Down A Mountain", their opening gambit for new shelter, 4AD. It is released on January 25th and features 10 tracks, one of which, "Black Smoke", is downloadable at the label's website at www.4ad.com [or you can click on the "Black Smoke - Freebie" link in the sidebar to the right - Ed]. It's rather a nifty tune as well. The extra pull with this album is with the new musicians on it. Solo songwriter David Kitt has joined the group for these sessions, plus the rarest of singers, the iconic Mary Margaret O'Hara features on a duet with Staples. Gotta be worth a listen! There are also guest cellists and flautists to boot.

Expect some tour dates announced soon as well as a soundtrack release for the films, "White Material" and "35 Shots of Rum".