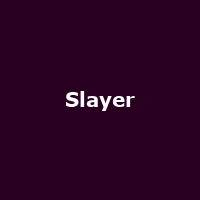 The Californian metallers have been forced to postpone the dates following a back injury sustained by bass player/ singer Tom Araya. The band also had to call a premature halt to their Megadeth co-headline Canadian tour as well as the postponement of their entire European tour.

The UK tour was due to start this Wednesday in Nottingham at Rock City.

Manager Rick Sales had this to say:

Right now our main concern must be the full and permanent recovery of Tom, so we have decided to clear the calendar and give him the extra time he needs to concentrate solely on good health.

The European tour will now commence in Manchester on 7th March, with London Forum dates on 8th and 9th followed by a jaunt across the channel for the European leg of the tour. The band return to the UK on 2nd April for the remaining few UK dates in Nottingham, Glasgow, Leeds and Birmingham. Support for the UK/ European 2010 tour will come from Swedish thrash-metallers The Haunted.

Tickets remain valid for the postponed dates, but refunds can be obtained from your point of purchase. Tickets for the rescheduled dates are on sale now.