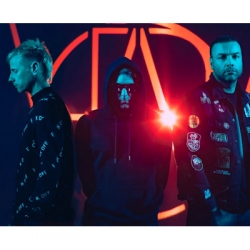 Muse have announced two big dates for September 2010 in Manchester and London.

The trio have been sailing on the crest of the wave, with latest album 'The Resistance' receiving rave reviews from pretty-much all quarters - including our own Elly Roberts, who awarded the album 5 stars - no less than it deserves, it's a real stonker.

The album also marked a slight departure to their usual sound, with more than a sprinkling of Matt Bellamy's tinkling (on the ivories, that is), and a really diverse instrument line-up, including a beautiful bass clarinet solo on 'I Belong to You'. It will be interesting to see how much of that instrumentation will be kept for the live gigs - hopefully they'll do it properly, and with tickets costing £45, they should be able to afford to pay an orchestra or two!!

So far, there's just two dates - one in Manchester's Lancashire County Cricket club on Saturday 4th September, the other a week later in Wembley Stadium on 11th. Hopefully, they'll add more dates - Sunday in Manchester, anyone, and while you're at it, you may as well sandwich the Saturday with a Friday date. Thanks.