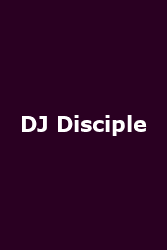 Diaries out all you House-heads, as mixmaster DJ Disciple is back in town next month!

If a little voice in your head is going 'DJ Disciple...Who Dat?', with fingers pointed at you, please get (re-)acquainted: David Banks as he goes by his civilian name is one the first DJs to have played house music on a UK syndicated radio station, with his Transatlantic mix being aired on Kiss FM fka Galaxy Radio between 1998 and 2001, and then on House FM from 2001-2005.

In the process, Disciple catapulted himself as the American DJ to have performed the most in the UK over the last decade, playing 50 dates a year for 10 years!

A household name in his field, he has collaborated with the crÃ¨me de la crÃ¨me of "Planet House", including Basement Jaxx (on whose 1996 'Slide Slide' track he contributed vocals). If this still rings no bell, surely you must have heard the club hit 'Work It out' (remember that video with bimbos hitting the treadmill while looking at his friendly face on a gigantic screen?), originally released in 2006 and played on Pete Tong's show for three months straight, before it was re-issued last year, featuring on Big Brother and remaining in the UK top 40 for 15 weeks. Enough of the history lesson, go witness history (no understatement spared!) as DJ Disciple plays a not-to-be-missed one-off show, alongside fellow American DJ Mr V at Groove Odyssey at the Scala on Saturday 5 December.