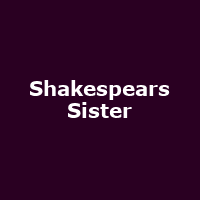 It's been a bloody long time, quite frankly, but Siobhan Fahey has finally opted to take her successful solo/duo act, Shakespears Sister, back to the boards with a new album in tow.

The Hoxton Underbelly (Hoxton Square) in London is the chosen venue on Friday 20th November and tickets cost £18.50 plus booking fee. This will be the only UK date this year and is a real coup for the venue.

After the demise of the popular all-girl trio, Bananarama, Fahey wasted no time in getting a new project off the ground, thus the good ship SS sailed into the charts and minds of the radio audiences with their debut album "Sacred Heart" and the Top 10 smash "You're History". But it was the follow-up album, "Hormonally Yours", that really brought adulation and the single "Stay" racked up an 8-week residency at number 1 in 1992. Further singles, "Hello (Turn Your Radio On)" and "I Don't Care" didn't quite scale those heady heights but still permeated the airwaves for several weeks apiece.

Now Fahey has a new album, primed and ready. It's called "Songs From The Red Room" and features production work by Sabres Of Paradise tweaker, Jagz Kooner plus contributions from Terry Hall and Death In Vegas. Promo single, "It's A Trip" has been well-received. A bit like this gig will be, so book now!

Shakespears Sister will head-out on an April 2010 UK tour, calling at Sheffield, Liverpool, Newcastle, Bristol and Birmingham, starting on 15th April at the O2 Academy in Sheffield. Tickets go on sale Friday 18th Dec at 9AM.

Watch this space for more dates!