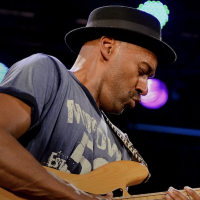 London's slightly off-pitch Barbican Theatre, sits within a pretty fearsome housing estate complex near to Farringdon and Moorgate. Fearsome as in architecture rather than dangerous, you understand. If jagged 70s tower-blocks turn you on, this is a classic example of a Grade-II listed residential housing area and forms a visible portion of the many other terraced flats around here. The Barbican Centre itself was built and opened in 1982 and has provided a wealth of art, media and music events in the 27 years passed. It is home to the London Symphony Orchestra and can house an audience of nearly 2000 in its main hall and over 1100 in its theatre. Good job too - they have some pretty stunning contemporary concerts coming up.

Our editor is already frothing at the jowls over the prospect of the Marcus Miller tribute to the Miles Davis album, "Tutu" on November 22nd and fair enough. Tickets are still available for this one, starting at £10.

Graham Coxon celebrates the acclaim for his 7th album, "Spinning Top", with a predominantly acoustic evening with special guests on November 28th. Ex-Soft Boys troubadour, Robyn Hitchcock, Martin Carthy and Natasha Marsh will aid Graham tell the stories influenced by John Martyn and Bert Jansch from the album. There will also be art projections by Chris Hopewell, the man behind Coxon's recent promo videos.

One of the most intense and sonically-charged live bands will play 2 dates in December. Spiritualized have been 'floating in space' since 1990 and their recent album "Songs In A&E" was partly inspired by lead-man Jason Pierce's near-death moment and hospital treatment some years before. Tickets may well be very limited now - worth trying to get cancellations closer to the night though.

Jan 2010 sees the ace-guitarist Paul Carrack return to London with a one-off date on the 13th . His new album, aptly-titled "I Know That Name", has proven to be a demonstration of his art. His world-wide hit "How Long" may well get the plaudits but this man has more strings to his bow (well, guitar) than you think. Tickets are £28.50.

The big one for me though is the visit of Norway's legendary saxophonist, Jan Garbarek. The man has made some of the most stunning and atmospheric albums since 1970 and shows no sign of blanding-out or guesting on Westlife albums. His label ECM has remained his choice for album releases such as "Dis", "Legend of the Seven Dreams", "Eventyr", "Rites" and his last studio album "In Praise Of Dreams" (2003). Drawing influence from Scandanavian folk and Islamic chants, his sound is totally unique and I can't recommend his output enough. "Dresden", his new 2009 live album, is a good enough place to start. Tickets start at £20 - £35. See you there.