Jeff Wayne's Musical Version of The War of The Worlds returns for 2010 UK/ Ireland tour! 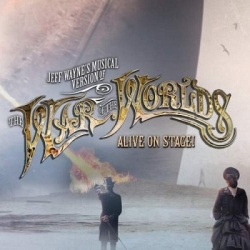 Jeff Wayne's musical version of The War of the Worlds, adapted from the HG Wells novel, first made an appearance in 1978, as a concept album. The concept being that Wayne was clearly bonkers.

But in a world bathing in brown and beige futuristic expectation and amidst great social and cultural change - specifically the arrival of garlic bread and black forest gateau - Wayne's sci-fi prog-rock concept album was a hit.

There was (and remains) a romance about 'TWOTW' that appealed to an audience emerging from the long, dark winter of the 1970s rubbing its eyes in disbelief. Wayne's creation was an escape and the voice of the late (great) actor Richard Burton as The Journalist leant the album a gravitas that couldn't be ignored.

But largely ignored, it was -at least for a quarter of a century or so after the initial excitement had died down. Then in 2006, in typical TWOTW style (and aided by a Spielberg cinematic offering starring Tom Cruise), it was announced that Wayne's classic (for it had become a classic) would be BACK.

It sold out everywhere it went. Plaudits, long overdue, rained on Wayne like invading Martians. So good were the receptions across the land (and the receipts) that Jeff Wayne's TWOTW is BACK. AGAIN.

The shows will feature Jason Donovan, Liz McLarnon (Atomic Kitten) and Moody Blues' singer/ guitarist Justin Hayward and will start around this time next year.

Tickets, starting at £42.50, are on sale now for all dates except Belfast and Dublin, which goes on sale tomorrow at 9AM.