Dark was the Night, Bright is the Future - Red Hot and Acoustic Compilation Reaches £400k Mark 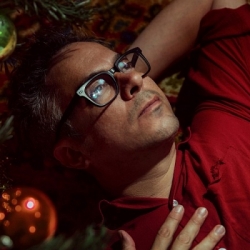 4AD released the compilation "Dark Was The Night" back in January 2009 in collaboration with the AIDS-awareness charity, Red Hot, and news has come through of the success of the project. The album has helped raise (cough) £400,000 in just 10 months, a huge result and a massive cash injection for the charity that started over 20 years ago.

You may remember the original Red, Hot & Blue (bands contributing re-works of Cole Porter songs) and Red, Hot & Rio (contemporary and latin artists covering samba and salsa) compilations from the last 80's and early 90's. Well, the name may have changed but "Dark Was The Night" has been very much a Red Hot collection, steered by The National's Aaron Dessner and featuring his band as well as high-spec artists such as David Byrne, Bon Iver, Feist, Antony Hegarty, Grizzly Bear, Arcade Fire and Cat Power.

So, is it any good? 31 tracks fill the album and I would have to say a good 20 of them are top notch. Highlights include Conor Oberst and Gillian Welch duetting on "Lua", My Morning Jacket's crafted beauty on "El Caporal" and the bonkers album opener featuring Byrne and The Dirty Projectors called "Knotty Pine". And you would have to be a mungwit not to be slightly stirred by the respectful cover of Nick Drake's "Cello Song" by Jose Gonzalez & The Books. Even the few so-so tracks are pretty good so-and-sos!

If you haven't already bought this fine set, pop it on your wish-list and let's get that figure up to half a mil! We'll keep you updated on progress.

On a separate note, a few contributors to the collection are also part of the Monsters Of Folk project and are playing 2 live dates in November. Conor Oberst (Bright Eyes) and Jim James (My Morning Jacket) are joined by M Ward for a date in Cardiff (Coal Exchange Nov 16th - £18) and a date in London (Troxy Nov 17th - Seats only £20). Grizzly Bear have also announced three rare UK dates in March 2010 at Edinburgh's Queens Hall on March 9th, Brighton's Corn Exchange on March 11th (£16) and Camden's Roundhouse on March 13th (£18.50).