Monroe and Fitzgerald - Best Friends in Play Against Racism 'Marilyn and Ella' at the Apollo, Nov 2009 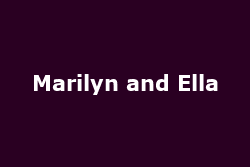 Fans of Marilyn Monroe will be interested in this one, as will anyone interested in American music legend and the resurgence of 'black' music during difficult times.

It's the 1950's, it's America and it's the heyday of the blonde bombshell, Marilyn Monroe. Famous for her looks and her films, she has been a legacy and icon for generations aspiring to be as beautiful, even today. But, apart from the well-documented darker-side of her career and the good times recording her music and films, her personal friendships have rarely been scrutinized. Until now.

Bonnie Greer has recently appeared in the spotlight whilst sitting next to Nick Griffin on the recent controversial edition of BBC's 'Question Time' but, of course, she is far more famous for being a writer and critic - 'Marilyn and Ella' is perhaps her most relevant piece yet. The play started out as a radio broadcast in 2005 and has since been a theatre production in Edinburgh and Stratford East.

"Marilyn and Ella" concerns Monroe's befriending of the jazz-legend Ella Fitzgerald at a time when black artists were physically and verbally shunned from the mainstream venues and spotlight in the USA and the black customers wanting to see such performers were ushered into 'black only' standing areas. Very little was made of their relationship at the time which some would have judged to be a 'bad move' for Monroe. But she showed humanity towards her talented friend when, together, they fought against rascism in order to get Ella a performance at the Mocambo Nightclub on Sunset Strip. She eventually became the first black performer there in the mid-50s.