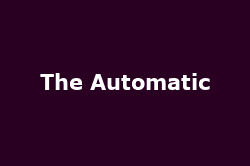 Those dastardly Welsh 'monsters' The Automatic have outlined some plans for the next month as well as talk of their forthcoming new album.

They have a tour confirmed to start next week on November 10th in Tunbridge Wells (Forum) continuing to Coventry's Kasbah on the 28th via a few stops in their beloved homeland somewhere in-between. Recent(ish) replacement Paul Mullen (from Yourcodenameismilo) will join them for the 12-night stretch and there are sure to be several airings of new material along the way. Tickets are pretty darn cheap as well - The gigs from the 25th to 28th are all under a tenner - on sale now.

The band have also been completing their next album, "Tear The Signs Down", due for release in Feb 2010 and their third for the Polydor imprint, B-Unique. Tracks are due to include new single "Interstate" (out on December 6th) and "Something Else" as well as production by Richard Jackson who has worked on their previous 2 albums.