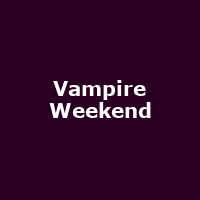 Tickets for much-fancied New-Yorkers, Vampire Weekend's, 2010 tour are now on sale. The band have announced 8 dates in February starting in the city of Cambridge at the Corn Exchange on the 7th and taking in Manchester (8th), Leeds (9th), Birmingham (10th), Newcastle (12th), Glasgow (13th), Edinburgh (14th) and finishing in London at the Brixton Academy on the 16th.

The press-darlings have been busy bees this year. As well as the usual array of live dates scattered around the globe, they have been working on their second album called "Contra" which, judging by recent download single "Horchata", promises to be as African-influenced as their debut self-titled opus released in 2008. Marimbas and djembe samples and sounds permeate the download track and create a rather pretty yet vibrant tune that will start the album tracklist off to great effect. Other songs on the album include "White Sky", "Holiday" and "Diplomat's Son".

Download or stream 'Horchata' for free from Vampire Weekend's website: www.vampireweekend.com. The new album 'Contra' is out on 11th January.

Tickets for the UK tour are available now, costing £15 for the regional dates, £17.50 for the Brixton date.