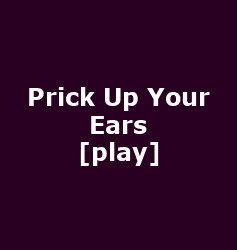 Prick Up Your Ears

Following the withdrawal of Little Britain funny-man Matt Lucas, ticket sales were not able to match the popular regional run. Lucas stepped-down from the role of Keith Halliwell following the suicide of his partner Kevin McGee last month, just days into the London run of the show.

The shows producers had this to say:

Despite very good feedback and notices for Con O'Neill's performance, the box office sales have not been sufficient to keep the show going, and so the producers have taken the difficult decision to close the show three weeks prior to its scheduled end date.

The show was due to run until 29th November, but will now close on Sunday 15th November at the Comedy Theatre. Tickets available now, costing Â£49.50, but we are able to offer you top seats for just Â£10 until 8th November, then Â£25 until the run comes to an end - click on the "Ticket Offer" button below to check availability.