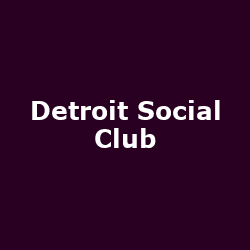 Newcastle-based band, Detroit Social Club, have announced a short run of gigs for December. They bring new material and good times to High Wycombe (Dec 10th), Birmingham (11th), Newcastle (17th), Stockton (18th) and Manchester (19th) and all for a fiver! Get in!

I saw this lot at the 100 Club earlier this year and they are definitely worth seeing! The band play a swirling mix of psychedelic indie-funk guaranteed to make you shake your locks and swing your pants. Their debut album is all but finished so expect a swathe of new songs to permeate the air during these dates.

Prior to all of this they have a date at The Masque in Liverpool on November 14th and a DJ set planned for the Newcastle World Headquarters (great name) on Dec 5th. Methinks the tour dates will increase next year if the new songs live up to the promise of 2009 single "Sunshine People".