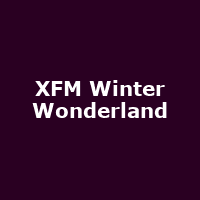 Influential Indie and Rock station XFM has announced two instalments of their annual shindig, Winter Wonderland. This will be the 6th year for the event with two nights earmarked for the occasion. The first night takes place in Manchester at the Academy on December 8th priced Â£20 and gathers together The Cribs, Echo & The Bunnymen, Frank Turner, Delphic and Liam Fray (minus his Courteeners). The second night kicks off at the Brixton Academy on December 16th and features Razorlight, The Temper Trap, The Big Pink and Bombay Bicycle Club - tickets cost Â£25 for this gig but other names will be added soon.

Previously the annual event has hosted memorable performances by Kasabian, Editors and Manic Street Preachers. This year's looks pretty darn good too - The Cribs have certainly set their stall out with their 2009 album, "Ignore The Ignorant" and a further single ("We Share The Same Skies") gets a release on November 9th. Razorlight got a rough ride for their last album "Slipway Fires" and although it only reached number 4, the band still command a pretty big audience and, along with Temper Trap, will guarantee quick ticket sales.

The tickets for both events go on sale at 8am on Friday 6th November.