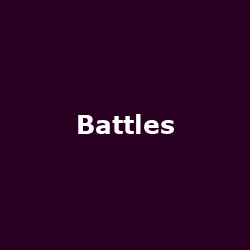 Busy boys, Battles. The sound of beards being stroked in fevered excitement at their admittedly engaging glitch-rock debut, "Mirrored", seems to have quietened down since its release - not that the band have sat on their artful arses and lapped up the praise. Nope, extensive touring and preparations for their soon-come second opus have taken priority during the past couple of years. If you want to hear what they have been up to then pull up a chair and cock an ear.

3 UK dates loom on the horizon, including a headlining show at the Manchester Academy on Monday 7th December. Charmingly entitled "Happy Fucking Christmas", they are joined by other co-Warpers, Flying Lotus and Nice Nice. Tickets cost £17.50 and are on sale now.

However if you fancy something a little more South then London's Coronet venue plays host to Warp20, a night devoted to the Sheffield-based electronic label that Battles record for. Tickets are £20 (limited amount left) for the entire event on Saturday 5th December. Other twisted luminaries performing include Broadcast (with excerpts from their Focus Group collaboration) and Plaid who will play a 'classics' set, specially re-fixed and tucked up for the dancefloor. The Warp20 series is also playing in Berlin and Tokyo.

Their final date is part of the ever-popular and always-crazy ATP 10th Birthday bash in Minehead's Butlins - but as this is sold out you are probably better off going for the cheaper options. Battles also have a few tracks included on the Warp20 compilation CD series released in September. "Atlas" and "Race:Out" occupy space on the "Chosen" set. Another volume entitled "Unheard" (rare Warp tracks) is released on November 9th.