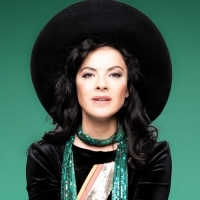 Camille O'Sullivan is making further strides in her bid for world domination, or at least a bit of success in the music industry by bagging a 26 night gig at the Apollo Theatre in Shaftesbury Avenue, London that will see her guiding audiences out of this decade and into the next.

The shows titled 'The Dark Angel' begin on Monday 7th of December and stretch all the way to January 16th, with each show being be backed-up with an international cast of musicians. With an acclaimed performance on Later With Jools Holland under her belt and the title of making cabaret cool again it seems like this classy lady is set for a wonderful future and she's giving us all a chance to be in on the party. So, to get a chance to see out the decade, or even see in a new decade with her click on the ticket links below. Tickets are on sale now and are going from £21 (for balcony tickets, stalls dress circle: £36), so get checking.