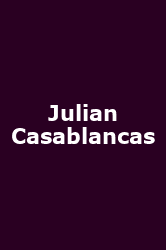 While waiting for The Strokes' long overdue fourth album has turned into agony, and with most members deciding to go and do their own thing for what seem only to them like a wee while, the news of frontman Julian Casblancas' super-hyped solo debut is a welcome distraction from this extended expectation!

So, in case you didn't know, next Monday 2nd November, will see the release of Julian's 'Phrazes For The Young', an eight-song album he recorded earlier this year.

Julian will support his solo effort with a European tour which includes four dates in the UK and Ireland next month, starting with The Manchester Ritz on 11th December, via the Glasgow ABC on the 12th, Dublin Academy on 14th and London's Forum on 16th December.

Until then, '11th Dimension', the synth-heavy first single off 'PFTY', which has got Julian dancing or rather moves-miming on the US talk-show Conan O'Brien a couple of days ago, is out now.

Tickets for the UK and Ireland shows go on sale at 9am (GMT) on Friday (October 30).