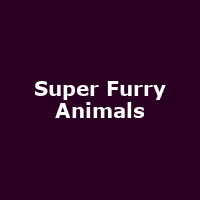 Gruff Rhys and his merry band of hometown unicorns return to Cardiff on November 20th to play a special date dedicated to their Creation Records back catalogue. The show is part of the Soundtrack Film & Music Festival being held in their base town of Cardiff and takes place on Nov 20th.

SFA recorded their finest moments with Creation between 1996 & 1999 with the albums "Fuzzy Logic", "Radiator" and "Guerilla" spawning classic festival tunes such as "Hometown Unicorn", "Something 4 The Weekend", "Hermann's Pauline", "Play It Cool" and "Northern Lites" as well as the controversial non-album track "The Man Don't Give A Fuck". 10 Top 30 singles ain't bad is it?

Rhys also sees a film of his being screened at the same festival. Called "Separado", it traces his ancestry back to South America. There will also be a special evening dedicated to the 25 years of Creation Records on Nov 20th - tickets on sale soon, details to follow!