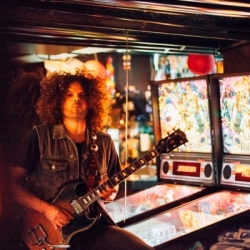 Recorded earlier this year, the album was produced by Alan Moulder (The Jesus and Mary Chain, Ride, My Bloody Valentine, The Smashing Pumpkins). The band has just undergone a line-up revamp following the departure of keyboardist Chris Ross and drummer Myles Heskett due to the usual creative differences, and will support this new effort with a European tour.

They will be stopping by the UK in mid- January 2010, via the cities of Newcastle-Upon-Tyne January 15th), Manchester (January 17th), Birmingham (January 19th) and London (January 21st).

Meanwhile, Yoga enthusiast (hence the album title, he says) front-man, Andrew Stockdale will be hitting the studio for a collaboration with Slash.

Wolfmother have currently have two singles out: 'Back Round' and 'New Moon Rising', respectively released in June and early October.