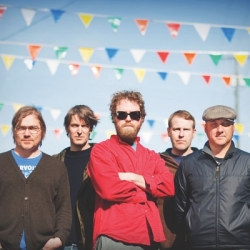 One of the most revered and influential US bands from the post-grunge era have announced just one date in the UK next year.

Pavement released the classic albums, "Slanted And Enchanted", "Westing" and "Crooked Rain..." in the early to mid-90s but are still regarded by many critics and music fans as the ultimate US DIY band with attitude - they were signed to independent labels for most of their creative peak, citing The Fall and Swell Maps as an influential launch-pad for their sound.

The big night is May 11th 2010 (and now also 12th May) and tickets go on sale this Friday (Oct 23) from 9am. This is scheduled to be their only UK date so don't hang about - get booking! Their curation of the 'All Tomorrow's Parties' Butlins event in Minehead in 2010 has already all-but sold out (one room remaining...).