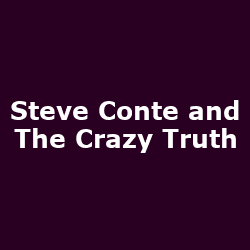 Steve Conte and the Crazy Truth

Ever since they exploded onto the music scene in 1973 the New York Dolls have remained one of the most respected bands in the punk scene, and an inspiration to many bands since, so to hear the news that guitarist Steve Conte is releasing a new album is just, well, wayhey! Woooo! It's good.

The axeman's latest group are called Steve Conte & The Crazy Truth and they release their self titled debut album on November 30th. Conte himself seems excited about the new album and has described it as "Classic roots with a modern twist" and with previous successes with The Contes, The Crown Jewels and of course The New York Dolls it is being hotly anticipated by luminaries such as super producer Steve Lillywhite and general fools such as myself. It is set to be a busy end to 2009 for Conte as he also joins the New York Dolls for a seven stop UK tour in December, going from 2nd - 10th. So that's a whole lotta things to look forward to for fans of the super punkers.