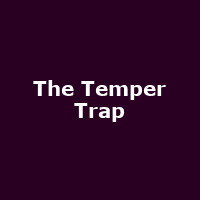 Australian sensations Temper Trap have announced two London dates for 2010. Initially just one date was announced at the Shepherd's Bush Empire for April 28th but now a second date has been added due to unprecedented demand for the following night (29th).

It's been a busy year for the band - their album "Conditions" has been picking up acclaim since its release in September, in fact our very own Elly Roberts gave it a 4-star review and proclaimed it as "very special". The single, "Sweet Persuasion" broke the Top 10 Singles chart later on.

Tickets for the 2 dates cost Â£15 although the 28th is nearing a sell-out at time of going to press!