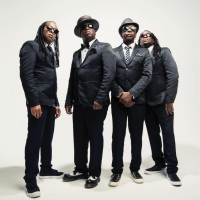 Veteran US rockers Living Colour will be playing four UK dates in December, hot on the heels of the release of their fifth studio album - their first in five years - at the end of November.

The African-American rock trailblazers are releasing 'The Chair In The Doorway' on Megaforce Records on 30 November, around twenty years after being talent-spotted by one Mick Jagger.

The short five-date UK tour kicks off at Tunnels in Bristol on 3 December. The Bristol gig, part of their first world tour for four years, sits alongside dates in North and South America, Asia and Australia. And Wolverhampton.

With a trophy-cabinet boasting Grammy Awards, multi-platinum discs and genuine rock pedigree, the low-key tour is either a withering indictment of how far Living Colour have fallen or, more likely, a chance to see an important part of New York's rock history in a more intimate venue.