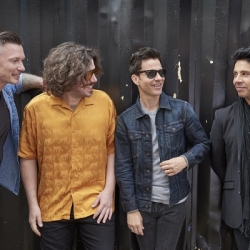 Stereophonics have announced that they are to play a seven-date tour next March. After a fantastically-received homecoming show at Cardiff Castle on October 3rd, the dates come as the Welsh rockers' next album release (Keep Calm And Carry On) beckons - set for November 16th.

The lads have come a long way since the band formed way back when in 1992, and their next album will be their seventh, from which the first single will be Innocent. Dakota, the band that Stereophonics have been mentoring in Kansas City, US, are also set to release their album before the end of this year.

Tickets go sale this Friday (9th October) at 10AM, costing £30 for all but the London date which will cost £35.