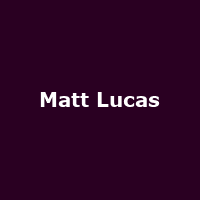 It has today been announced that Matt Lucas will not be performing in the West End show 'Prick Up Your Ears' until further notice following the death of his former partner.

Kevin McGee was found hanged at his flat in Edinburgh yesterday, hours after updating his facebook status to: "Kevin McGee thinks death is better than life". Matt and Kevin were joined as part of a civil union back in 2006, but split in 2008.

The play launched at the Richmond theatre this August, then went to the Lowry in Manchester and Brighton's Theatre Royal, before hitting the Comedy Theatre in the West End a few weeks back. Matt featured as Kenneth Halliwell - an actor who in 1967 murdered his lover - the late English playwright Joe Orton. The role will now be played by understudy Michael Chadwick until further notice.

Matt is also due to appear in the live comedy chat show 'Scott Capurro's Position' hosted by funny-man Scott Capurro at the Royal Vauxhall Tavern every Thursday. Matt is down to appear at this Thursday's show, but we are presuming, given the tragic circumstances , that he will not be at the event, which is due to feature comedian Shazia Mirza.

Matt Lucas has understandably cancelled his Scott Capurro RVT appearance, but appearing in his stead will be Gillian Taylforth (Footballers Wives/ ex-Eastenders).