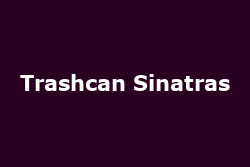 In the five years since we last heard a full album from Trashcan Sinatras, things have been looking up. After two decades in the business the guys behind the 1990s GO! Discs albums 'Cake', 'I've Seen Everything', 'A Happy Pocket' and 2004's 'Weightlifting' have decided to throw caution to the wind, fall in love and get happy. The result - new album 'In The Music' and a UK / Ireland tour to follow in November. With a triumphant Fujirock Festival, Japan appearance and 18 date US tour under their belts, the band can't wait to play their first UK and Ireland dates for four years.

The new album - full of relaxed harmonies, typical Trashcans - were set to arrangements in a back room in the South Side of Glasgow over the summer of 2007, and recorded in New York over a crisp, cold winter in 2007 / 8. At the heart is a studio process that's new for the boys - of relying on instinct, and leaving the received structure of songwriting and recording behind. Joined by occasional bassist Grant Wilson, in Davy Hughes' "family duties" absence, two extra members were drafted in for the album - Stevie Mulhearn and Jody Stoddart, both old friends, and both pulled in for their musical magic. A trip to New York was probably enough to entice them!

Someone must have been smiling on 'In the Music'. As an added, and somewhat unexpected sparkle, the band bagged 70s singer - songwriting legend Carly Simon to sing on Should I Pray. "It was sheer chance," says John Douglas. "Producer Andy Chase's parents live up in Martha's Vineyard, and we went up there when we'd finished in New York just to record a few more tracks. Carly lives there, James Taylor has a place there too - it's a kind of musical hippy vibe. Andy mentioned that he knew her and I said, I love Carly Simon, for me she's just amazing, an incredible songwriter with such a beautiful, distinctive voice,an icon."

With Simon's powerful vocals already in the mix, another feminine element comes from Ali Smith - the poet whose words in Half an Apple had already been put to music for the band's contribution to Chemikal Underground's 2007 album, Ballads of the Book, a co-operation between Scottish writers and musicians. The pairing of poetry and the Trashcans' sympathetic arrangements was so successful that Douglas took another of the poet's pieces for In the Music; it became the eponymous title track.