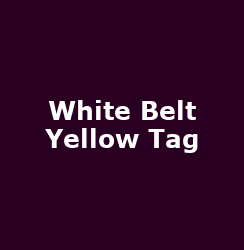 White Belt Yellow Tag have today unleashed their beautiful and atmospheric new video for the title track from their brand new EP.

Brooding with a Krautrock klang , the fantastic 'Remains EP' will be released on Monday October 19th 2009 through Distiller Records. It was self-produced and mixed by Chris Potter (The Verve, Blur).

It's what could be potentially the last day on earth for an astronaut before setting of into the unknown unsure of whether he'll return.

The song title 'Remains' represents the Earth and all of human existence being all that he will leave behind him. The protagonist takes flight before dawn running through the landscape and embracing as much of nature as he can encounter before being taken to the launch site. He is collected and taken to his destiny by the band in the guise of two Military Intelligence Officers and a Scientist.

'Remains' is taken from the band's recently recorded debut album 'Methods' (set for release early next year), an amazingly far-reaching and beguiling record. Craig Pilbin's song-writing nouse and Lockey's "sonic alchemy" have combined to create something unique where epic wide-screen atmospherics work in harmony with moments of white-noise and fragile beauty.