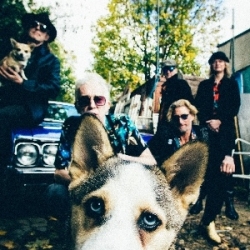 You will no doubt be rather more aware of London bovver-boys Krakatoa - if not then you should read more, or certainly click onto this site far more often. After numerous triumphant gigs in and around the Capital and a pair of keen reviews of their debut single, "Rock N Roll Revolution", in the Daily Mirror and on AllGigs, the future looks rather rosy.

So much so that they have another single in the pipeline and a lucrative support slot on the upcoming Alabama 3 tour. The dates start in Cambridge at the Junction on the 4th November, ending in Dublin at the Tripod on the 21st. One venue of note during the tour is the infamous home gig location on the 10th - The Forum in Kentish Town and should be a well-attended night and not just for the country-punk hosts! An exclusive CD will be available at selected nights - be quick!