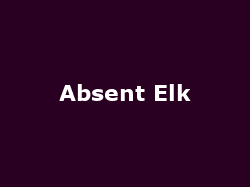 Absent Elk. Present Moose. Now the roll call is done it's my pleasure to announce that the indie quintet Absent Elk are having a very exciting two months with the release of their debut album 'Caught In The Headlights' in October followed by a six stop tour in November.

The British/ Norwegian group have already achieved quite a high profile after queens of pop 'Girls Aloud' invited them on their 'Out Of Control' tour in Spring of this year after seeing a YouTube video of the band performing 'The Loving Kind.' Now they are hoping to keep the momentum going with their album and the shows, which starts on 2nd November at the Academy in Bristol, before travelling to Islington (4th), Newcastle (5th), Oxford (7th) and Liverpool (8th) before the grand finale in Sheffield's o2 Academy on the 9th.

With tickets for the shows rolling in under the cool Â£10 barrier it is more than worth seeing these promising guys before they get all big and famous, and probably substitute their titular Elk for a Moose (everyone knows Moose are far more Rock n' Roll). Click the links below to get your place in the crowd.