Cerys Matthews: new album to be released in Welsh and English, 5th Oct 2009 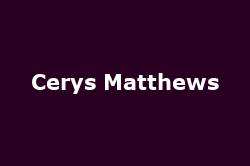 Cerys Matthews will release her new album 'Don't Look Down' on October 5th.

It will make history as the first album by an artist to be released in Welsh and English language versions simultaneously.

Recorded at sessions in Nashville, Seattle, London, Providence and Rhode Island, 'Don't Look Down' was written, produced and recorded by Matthews and Mason Neely.

The album's tracklisting is: 'Arlington Way', 'Into The Blue', 'Aeroplanes', 'Spider and the Fly', 'It's What's Left, That Makes it Right', 'Smash The Glass', 'Salutations', 'A Captain Needs A Ship', 'Evelyn', 'Oranges to Florida', 'Heron' and 'Through A Glass'.

Matthews will follow the release of 'Don't Look Down' with her first UK tour in over three years, running from 17th - 31st October. Playing alongside Mr. Teel (Nashville), and Mason Neely (Rhode Island). She will play two full sets each night at the shows.

Aside from working on 'Don't Look Down', Cerys Matthews has also been working on a number of other projects. Aside from her daily afternoon radio show for BBC 6 Music (cerys.6music@bbc.co.uk), she has also written and presented documentaries for BBC2 on Celtic poetry, the music of the Mississippi river, legendary singer Dorothy Squires and a well received Radio 2 documentary on Otis Redding. She's also currently working on a history of Maida Vale Studios for Radio 2.