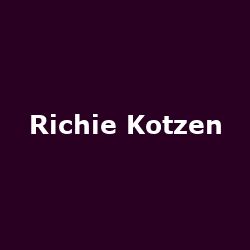 Touted as one of the best guitar players in the world, with a voice on par with some of the greatest rock/soul singers in modern music's history, Richie Kotzen is truly a living legend. He continues his incredible journey this October, with a 10-date UK tour!

Kotzen's musical destiny was clear from childhood, when he developed a fervent interest in guitar at just 7 years of age. By the time he left his teenage years, Richie already had 3 solo studio albums under his

belt, and joined the multi platinum glam metal band Poison. He recorded the 1993 album "Native Tongue" with the band, and ventured on a world tour in support of the record, sealing his status among Rock music's greats.

After working with Poison, Kotzen continued to record solo albums on labels including Geffen, Shrapnel and JVC, until in 1999 he was invited by jazz legend Stanley Clarke to form the band Vertu. They recorded a self-titled album for Sony, and spent the summer in Europe playing an array of festivals, including the acclaimed the Montreux Jazz Festival. In the same year, Kotzen joined the immensely popular rock band Mr. Big, best-known for their No.1 hit "To Be With You". In 1999, they played the Osaka Dome in Japan alongside Aerosmith, and Kotzen wrote 2 studio records with Mr. Big before achieving his first solo No.1 single in Japan with "Shine".

10 years later, and Kotzen still tours around the world, with universal superstar status. He has played with Kiss legend Gene Simmons, and made acclaimed appearances with Keanu Reeves' band Dogstar. A musician's musician as well as a charismatic performer,

As a solo artist, Kotzen has amassed a 25-plus album discography, and is far from being out of steam! An artist who packs out venues in his own right, he also supported the incredible Rolling Stones on their "A Bigger Bang" tour in 2006.

Richie Kotzen knows, more than anybody, the importance creating and performing holds for him as an artist:

Touring and making music is my life. It is all I have ever done. I am very grateful to all the people around the world who have made that possible.

His appearances in the UK this October will certainly reaffirm just how much this gratitude is reciprocated by his fans!