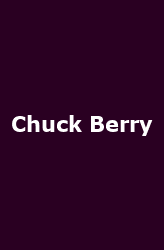 One show to rule them all. Despite the Tolkien reference this is even more epic news than anything Middle Earth could throw out. The one-and-only, legend-of-legends Chuck Berry is hitting these shores for an all too brief night at London's Hammersmith Town Hall.

Berry, often cited as the man who moved guitar music into the rock n' roll era, is hitting London town on Friday 27th November and it will be one of the most eagerly sought-after shows in the UK. Even at the ripe age of 82, the Gibson-wielding elder of all things Rawk still has millions of fans and admirers who understand his importance even to this day and with only one show, the demand to see live performances of 'Johnny B. Goode', 'Roll Over Beethoven' and 'Rock and Roll Music' will be staggering, so check the "Tickets" link below to check ticket availability, 'cos for one night only the Berryman is in town. Tickets cost Â£59 + booking fee.