Iggy and the Stooges to perform 'Raw Power' live in London, May 2010 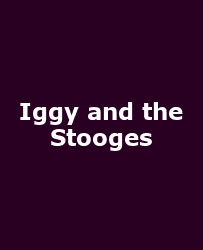 Iggy and the Stooges

Raw Fish is great. Raw eggs are apparently quite good before doing a training montage (thanks Rocky) but Raw Power, the classic Iggy And The Stooges album, is the best kind of raw you can have and to prove it the group are to return to it in its entirety as a pick for ATP's 'Don't Look Back season'.

The punk Godfather Iggy Pop will take time out from flogging insurance on TV to join 'The Stooges' at London's Hammersmith Apollo for two shows on consecutive nights (2nd and 3rd May) next year. The Stooges have graced the event before in it's debut year to perform their classic 'Fun House' album but this is the first time they have been joined by Iggy and there is an extra ingredient to fuel fans excitement as former guitarist James Williamson is going to play with them for the first time in thirty five years. Support comes from vintage punkers Suicide, who will be performing their self-titled debut album.

So, if this tickles your fancy then check out the info/ ticket availability below (tickets are Â£30 + booking fee). And if anyone buys a spare ticket, it's my birthday on the 2nd May. Just so you know.