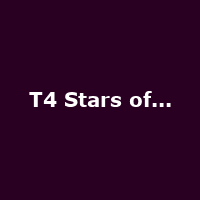 OK, pop-tastic kiddies: listen up! Announced yesterday, and on sale right now is a pretty cool gig at the Earl's Court Exhibition Centre, hosted by the doyen of nouvelle pop: T4.

Playing on the day will be the sensation of 2009: La Roux, along with Sugababes, Calvin Harris, JLS, Alexandra Burke and a host of regular T4 ermm.. hosts, including: Steve Jones, Miquita Oliver, Rick Edwards and Jameela Jamil.

T4 are currently conducting a "World's Greatest Popstars" poll, with tresults to be announced at the show. Head on over to www.4music.com/vote/world-s-greatest-popstars.html to have your say.

The gig takes place on Sunday 29th November, with doors opening at 11AM. Tickets cost Â£34 seated and Â£36 for standing (bit odd, that) and are on sale now.