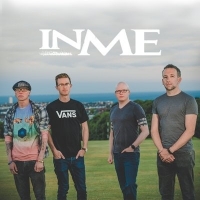 InMe have just announced the cancellation of tonight's gig at The Royal in Derby due to a car crash yesterday.

The Essex band were due to embark on the first date of their September/ October tour tonight, but after injuries sustained by Ben (fractured wrist) and Simon (ribs) in a car crash, yesterday, they will now be starting the tour in Newcastle tomorrow (17th September).

The band were all OK(ish), and had this to say:

FIRSTLY... WE ARE ALL ALIVE. Unfortunately, due to a bad crash caused by a clumsy fool, Ben has broken his wrist. Simon isn't too pretty either. The result of this is that tomorrow's Derby show will be rescheduled, apologies to all, please get the word round to any of your mates that were going... and regrettably Ben is in no shape to play any of the tour dates, as a result we will be going old skool as a 3 piece. Massive sympathies for Ben, he is truly gutted. And his car is destroyed. Ben has a cast on and has a check up in 1 week, but we are talking at least 4 weeks until he can play again. Simon is in bad shape after quite a nasty injury but given a full days rest should be back to health. The first date of the tour is now in 2 days at Newcastle and we'll go balls-out as I think we all need to let off some steam on the stage. We are all gutted that Ben is not with us for the tour but promise to smash it every night for him, he will be back in action by November. The main thing is that everyone is alive, Herald Moth is doing very well, the remaining 3 of us are looking forward to Newcastle, Ben will be at London and Brighton so you can all kiss his arm better!