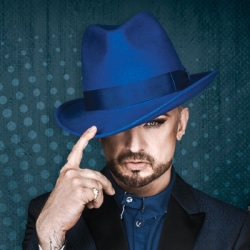 English singer, songwriter and DJ Boy George has announced a series of special dates at the Leicester Square theatre ahead of a 2010 European tour.

The colourful former Culture Club singer, who was recently released from prison, will perform an eight night residency at the Leicester Square Theatre between Saturday 20th December and Wednesday 30th December. The shows will be an intimate, stripped-back affair, featuring hits past and present from his career in music, as well as new material.

Before then, you can catch him in DJ mode at the Ministry of Sound's regular "Gallery" event, along with Judge Jules, Tall Paul, Matt Hardwick, King Roc and Deepgroove - tickets: £15 + booking fee. He'll also be involved in some DJ action at Brighton's Coallition for the "Wild Fruit Birthday celebration" on 3rd October along with Dusty O, Tasty Tim, Neil Duffie and Jon Byrne. Tickets cost £10 + booking fee.

Tickets for Boy George's Leicester Square Theatre residency are on sale now ranging from £35 to £45. All prices + booking fee.