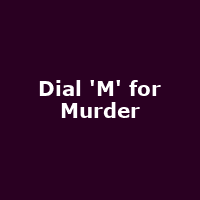 Prior to a stay in London's West End in 2010 Frederick Knott's famous psychological thriller 'Dial M For Murder' will be touring seven theatres across the country between September and November.

The play, which was brilliantly adapted by Alfred Hitchcock for Hollywood, has been updated by Evening Standard Award nominee Lucy Bailey and centres around Tony, a man so consumed with jealousy and the suspicion his wife is having an affair, he plots to have her murdered. Of course everything spirals out of control as what seemed like the perfect crime suddenly comes back to haunt him.

Beginning In Leeds West Yorkshire Playhouse, it has multiple dates in Oxford, Bath, Nottingham, Richmond and Cheltenham before ending its run in Brighton's Theatre Royal. All dates and ticket information is available below. It should be a great experience to see this gripping piece of theatre in smaller, atmospheric venues before it hits the glitz of the West End next year, so if it's your cup of hot stuff then grab 'T' for Tickets.