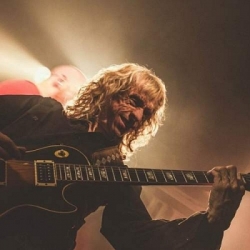 Europe have just confirmed a nine-date tour of the UK in February 2010.

The tour follows the 14th September release of Europe's critically acclaimed new studio album "Last Look At Eden" which features the singles "New Love In Town" and the title track. The album marks a departure from their "final countdown" sound to a heavier, bluesy, hip-shaking metal sound. The band recently headlined the UK's Bloodstock Festival to rave reviews. Metal Hammer had this to say about that performance:

Europe's note perfect, slickly choreographed show, pulls together all ages and tastes for a feel-good finale that smells like total victory.

The very special guests on the UK dates are British metal veterans Diamond Head. Tickets go on sale this Friday (18th September) at 9AM. All tickets are £17, with the exception of London (£18) - all prices + booking fee.