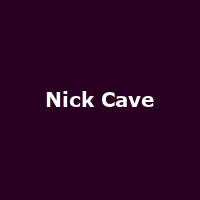 With his astounding output in music over the years as well as his success in the world's of novel and screenplay you would think the guy would be a bit miffed off with it all and would just want to put his antipodean legs up for a long rest, yes? Don't be a fool. And just to prove you (yes you) wrong he is to embark on a tour of the UK and Ireland to coincide with the release of his new novel 'The Death Of Bunny Munro.'

To kick it off he is doing book-signings at HMV Oxford Street, London on 28th September at 1pm before zipping up to Manchester for a 7pm signing at Waterstones followed by a night's rest before going to Borders in Glasgow for another signing. All these are free events. Except if you need to buy the book.

Mr Cave then has an evening of conversation with one of England's finest wordsmiths, the man himself, Will (Self). This takes place at the old Market Theatre, Hove on 30th September. Then to prove he is a complete action junkie he hosts four 'Evening's with Nick Cave' starting on 11th October in the Palace Theatre, London then Vicar Street, Dublin (12th) and the Picture House Edinburgh (13th) before going overseas for a bit then returning for Evening number four, again at the Palace Theatre in London (25th). Details of these evenings and to get your tickets are below.

So 'Cave' in to the desire to see him before he 'Nicks' off back to his homeland. You'd be a bad seed not to.