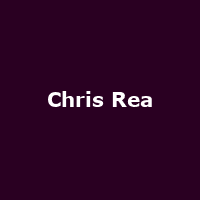 Middlesborough's football team may have been dumped into the Championship for a season or two but one local man has managed his own destiny with a raft of 'Premier League' albums over the past few decades. Chris Rea, replete with rasping vocals and a season ticket for the aforementioned 'Boro', has now announced details of a new tour for next year with a new album in tow. Tickets go on sale on Friday 11th September at 9AM!

The Teesider kicks off his race around the nation with a pit-stop in Birmingham at the Symphony Hall on March 9th 2010 and concludes in another Hall, the Waterfront in Belfast on April 5th. The tour takes in several 'halls' in fact (hence my pun of a headline) but demonstrates how bloody serious Rea is with his touring, covering most of the major cities in the UK. Beware though - there is currently only one gig lined up for London and that's at the Hammersmith Apollo on March 14th.

As well as his forthcoming new album (title TBC - due October 2009), he will no doubt be treating fans to classics such as 'Auberge', 'Fool If You Think It's Over' and 'On The Beach'. 30 million Rea buyers can't be wrong....